Gerace 2015 – Summary of the Results of the UBC Excavation

The second campaign of the UBC excavations at Gerace in central Sicily lasted four weeks, from 11th May to 6th June 2015 (fig. 1). In Area A, the late Roman villa originally identified by surface clearance in 1994, work concentrated on exploring parts of the west and south corridors and of Room 7, the largest room in the villa. In the west corridor the surface proved to be only of beaten earth (in successive layers); the large room by contrast was paved in opus signinum (red mortar with crushed brick) (fig. 2). Although all the rooms of the late Roman villa have not yet been explored, one has the impression that owner provided only the south corridor and the dining room with mosaics: either he ran out of money, or perhaps he died during the project, and his heir and successor did not have the same interest in finishing the building to an equally high level. The villa was constructed in the second half of the fourth century, perhaps c. 370/390, and was destroyed by a fire either in the second half of the fifth century or very early in the sixth. 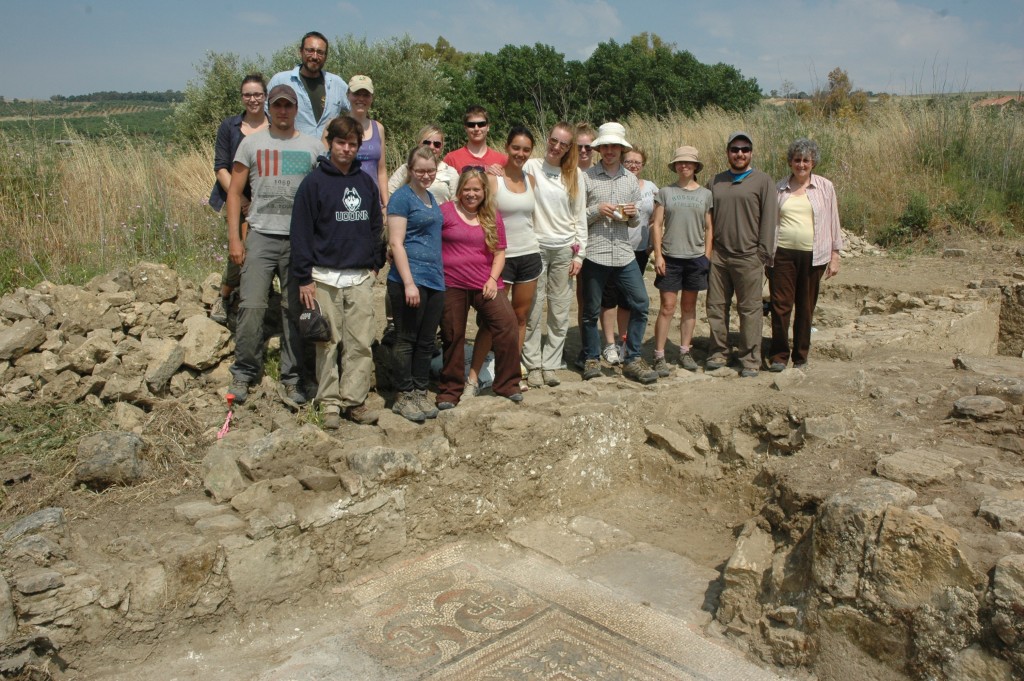 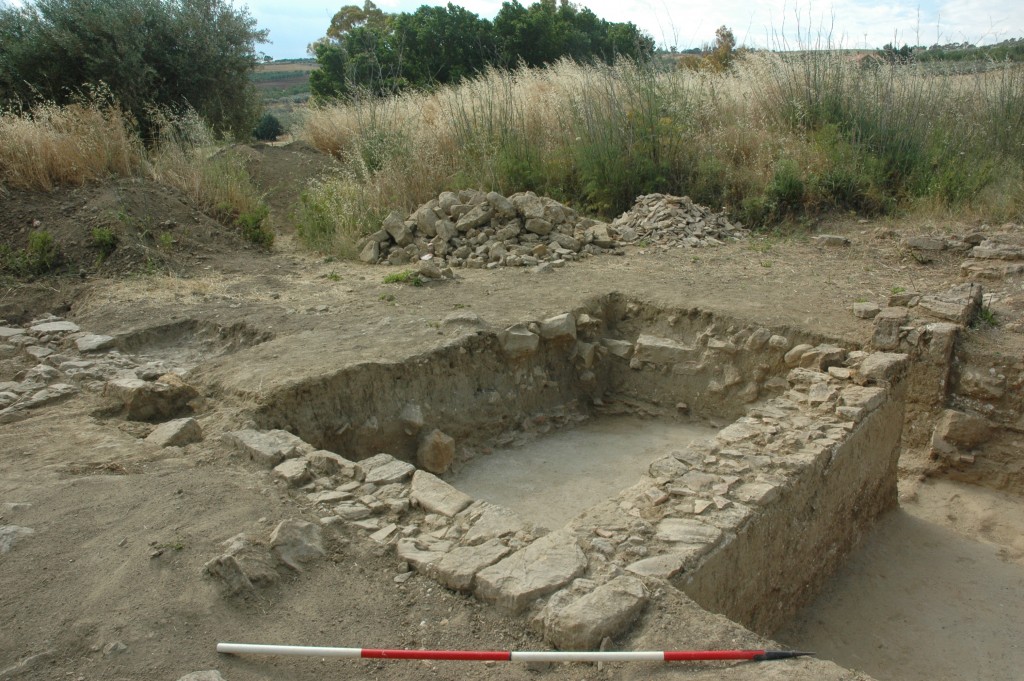 Figure 2: The west corridor (right) and part of Room 7

In the south corridor, a portion of the mosaic floor at its western end, already partly exposed in 1994 and 2007, was studied afresh, and the exact nature of the design here (a single row of linked swastika-peltas with a row of peltae along the edges) established for the first time (fig. 3). In addition, a new part of the mosaic, not hitherto uncovered, was exposed further east. It consists of a design of straight bands of laurel leaves in contrasting colours (red and yellow, and blue and yellow), intersecting at intervals to form a series of swastikas; there are guilloche ‘mats’ in the squares left in the field (fig. 4). The design, unique in Sicily, is rare in mosaic, being paralleled only at Carthage and Acholla in Tunisia and at Saint-Émilion near Bordeaux in France (all of them fourth- or early fifth-century pavements). The mosaic was probably laid by Sicilian rather than immigrant African craftsmen, as the commission at Gerace seems to have been too small to warrant the expense of bringing mosaicists based overseas to the site. In the eastern extremity of the trench, part of a panel with a different pattern (a rectangular panel with a guilloche frame) was found, marking a transition to a new mosaic design in mid-pavement. 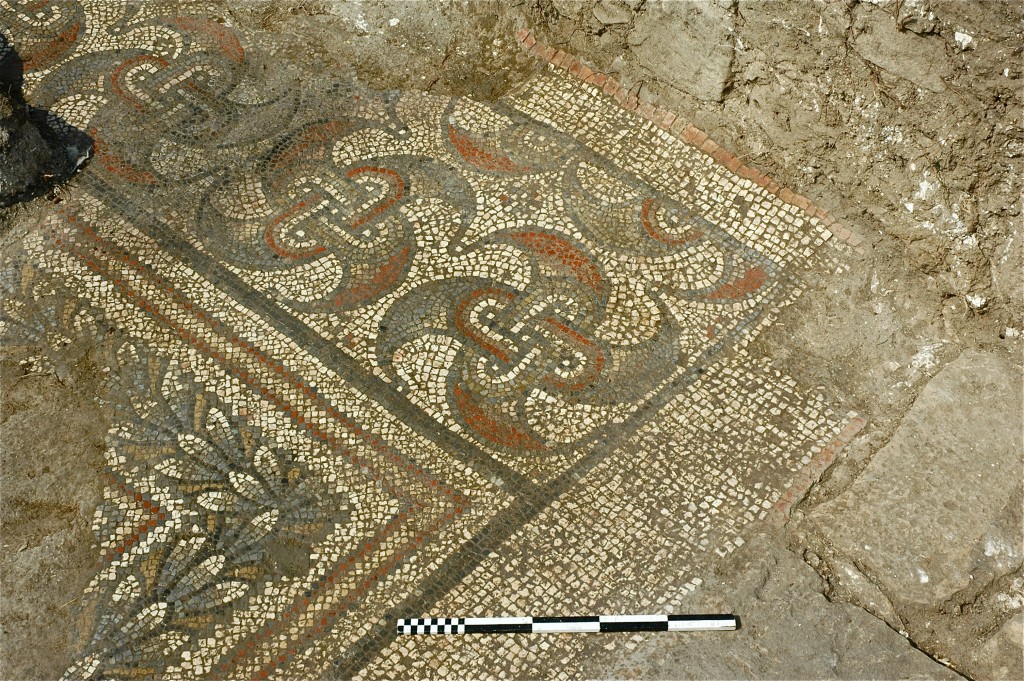 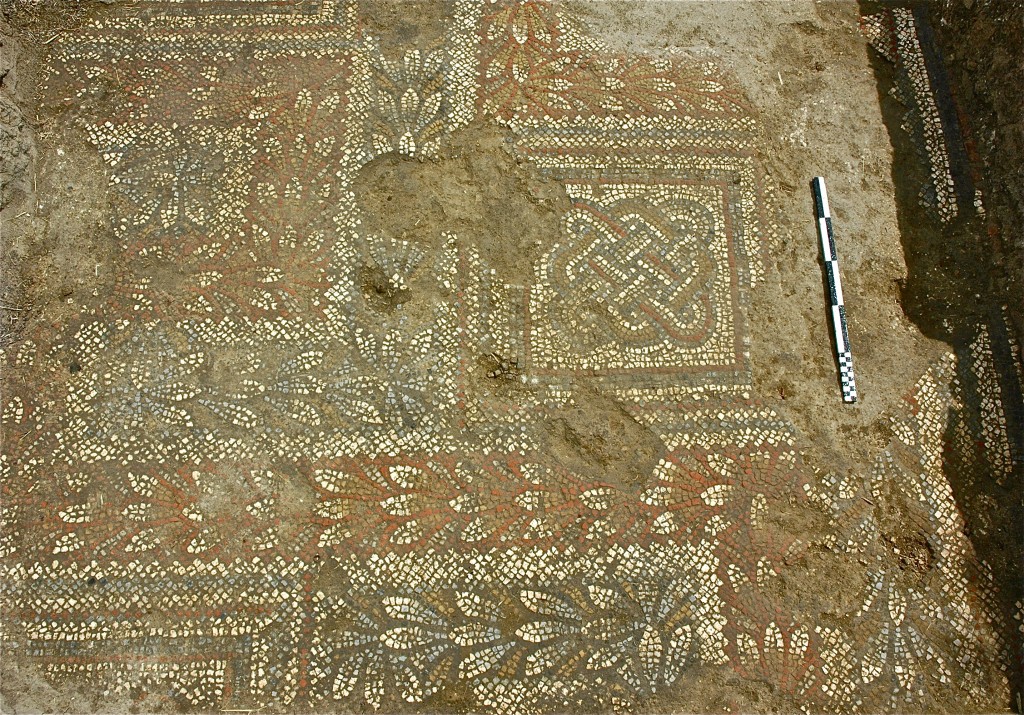 The plan of the large building with intact stone floor, first found in 2013 and provisionally dated to the second quarter of the fourth century AD, was further investigated. Additional trenches (B3, 4 and 5) have shown that what was initially taken to be a terracing wall was in fact the eastern wall of the building, which is now known to have been c. 50 m long and 16 m wide. Nothing was found to dispute the preliminary conclusion in 2013 that it was the estate granary. Two extraordinary features of this building remain puzzling: the east wall (1.37 m wide) is double the width of the western external wall and the two internal partition walls; and the paved floor stopped 2.20 m short of the exterior walls on each side, possibly to allow timber constructions such as grain bins to be erected against the longitudinal, outer walls of the building.

In the eastern part of trench B1, where walling belonging to structures earlier that the fourth-century granary was found in 2013, further excavation demonstrated that three pre-granary phases were identifiable, the oldest of the second century AD (African Red slip ware Hayes form 8A). There is no evidence for the frequentation of the site before that date, apart from a few scraps of black glaze pottery of Hellenistic date, and a solitary fragment of Attic black figure pottery of the sixth century BC, depicting the shield and lance of a Greek warrior.

The fourth-century granary was destroyed in mid-century (probably in the earthquake of AD 361/363) and was not rebuilt, as we established in 2013. Excavation in 2015 in the area between it and the late Roman villa of c. AD 370+ had hoped to explore a bath-suite belonging to the latter, the stoke-hole of which had been identified in 2013. Of that bath-house, however, only the foundations of the hot water pool and its accompanying walls remained; it had clearly been stripped and demolished sometime during the life of the late Roman villa. One interesting aspect of it was that it was furnished with oval box-flue tiles (as opposed to the normal rectangular tubuli) for the hot air to rise in the customary manner of Roman hypocausts. This type of flue-tile is unknown in Sicily but is paralleled, also in a late context, at the villa of S. Giovanni di Ruoti in Basilicata. This bath-house was at a higher level than the rest of the villa and must have been an independent block, reached up some stairs from the villa proper below it.

Major building works were undertaken to replace the baths. A trench was dug to a depth of 2.50 m in order to insert at least two rooms, each 5.94 m wide, deep into the slope of the hill, removing the baths in the process. The timber floors of the new additions were now only slightly higher than the mosaic-paved hall alongside them.  The new rooms had an interconnecting doorway on the west side but no direct access to the hall. Despite their proximity to the grand reception room, the new structures (inserted sometime early in the fifth century?) were used as stores for agricultural produce. Fragments of dolia, the large storage vessels to contain such products, were found in the more northerly room. As though to emphasize the importance of these storerooms to the economy of the villa, an additional wall in a secondary period (the mid-fifth century?) was built alongside the east wall of the reception room, either because of structural problems with the latter or, more probably, to insulate the storerooms better and so keep them cool in the summer months; inserting the rooms so deeply into the side of a slope where the ground level changed sharply here would have had the same effect. The original doorway, now too narrow to be serviceable, was blocked up and a new opening was punched in the wall dividing the two rooms (fig. 5). 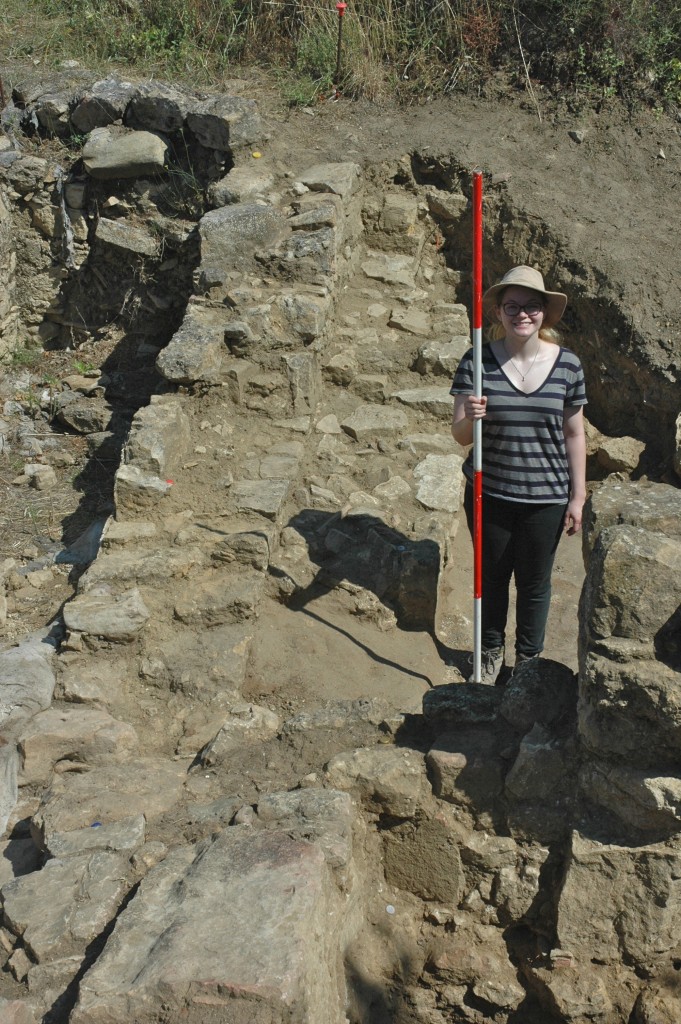 Figure 5: The double wall between the reception room (left) and the newly uncovered storerooms sampled on the right. A blocked doorway is in the foreground.

When this villa burnt down at the end of the fifth century or very early in the sixth, the considerable agricultural produce stored in these rooms was also burnt (fig. 6). Hundreds of carbonized seeds were recovered from the excavation through water separation, and are being examined in the Archaeobotanical Laboratory of Professor Jennifer Ramsay at SUNY Brockport, while further samples are being analyzed at the Centro di Restauro in Palermo. The seeds certainly include wheat varieties, barley and legumes including the broad bean (fig. 7); elsewhere in the villa, evidence for almond cultivation has also been found, in the form of a carbonized kernel. These deposits when fully analyzed will help to establish the range of crops being grown on the estate at Gerace during the fifth century AD, a unique discovery for late Roman Sicily. The find also demonstrates that Gerace was a working farm and not just a place to relax in the fifth century AD; indeed the demolition of the bath-house, unless it was replaced by another elsewhere, raises questions about the exact standard of living for the owner of Gerace in the fifth century, whatever the grand intentions of the original dominus (landowner), who commissioned the late fourth century villa, had been. 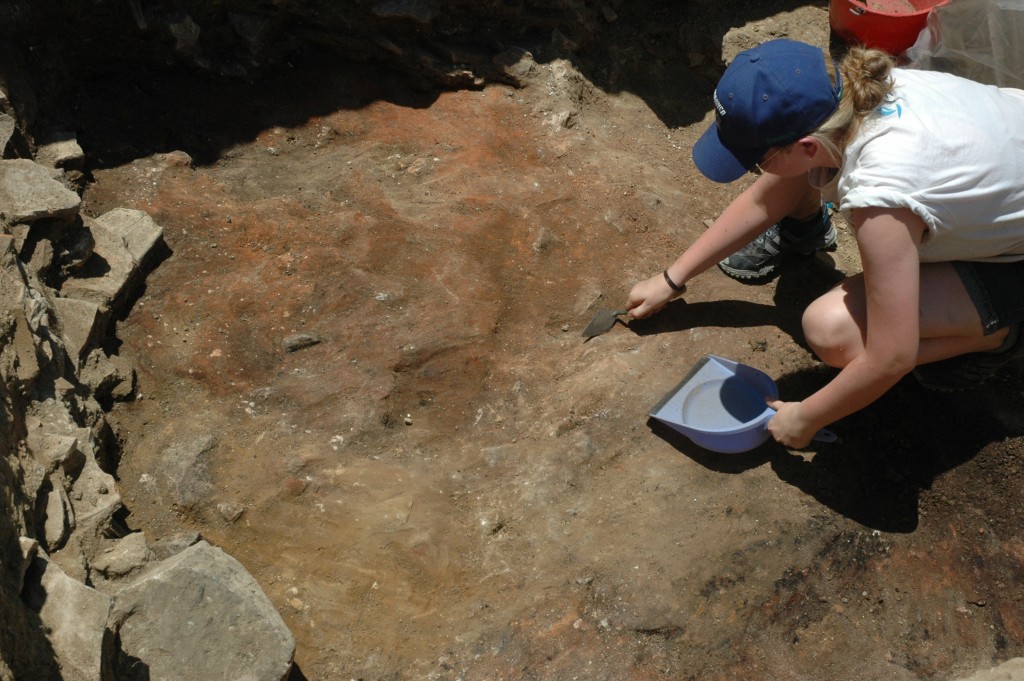 Figure 6: The earth scorched red by the heat of the final fire in one of the storeooms, after removal of the burnt seeds. 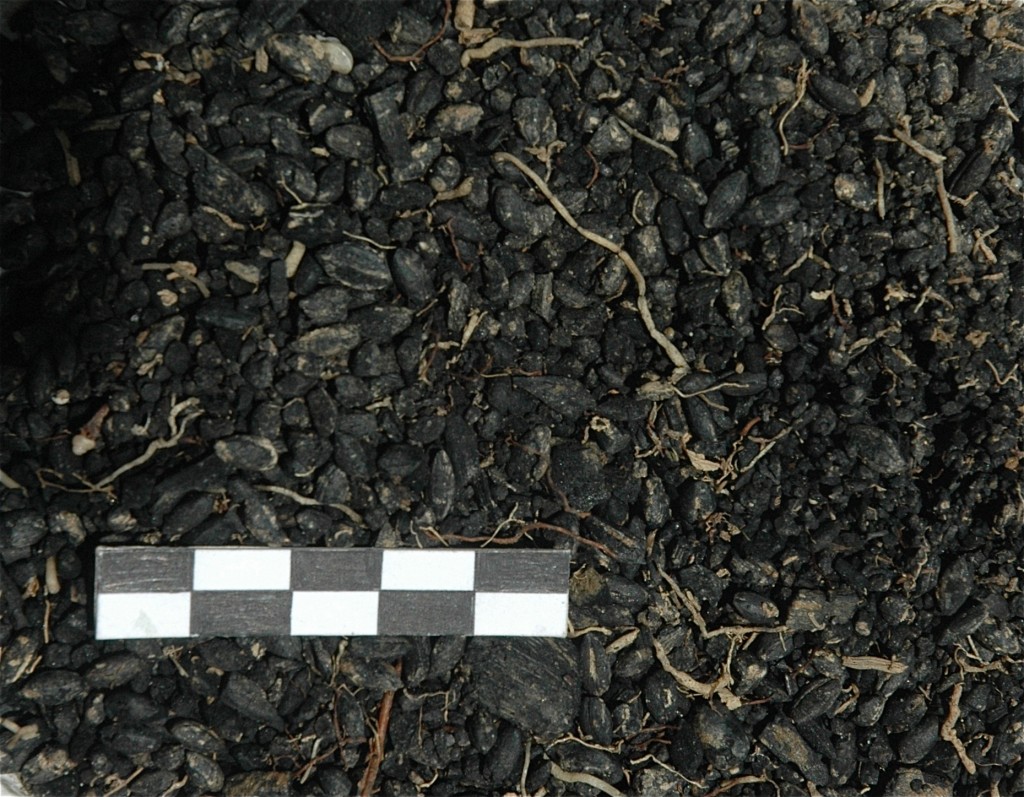 Figure 7: A tiny fraction of the carbonized seed deposit from one of the two storerooms.

We have, therefore, now an answer to one question – where the agricultural produce was stored in the late Roman villa – since the earlier granary had been completely destroyed in the mid-fourth century earthquake and was therefore out of service. But where did the owner who built that impressive granary actually live? Was he an absentee landlord, or did he live in another, earlier and possibly grander villa on the site?  Just up the hill to the north-east is another large building identified by geophysics and so far completely unexplored. Is it just an outbuilding, or could it possibly be an early fourth-century Roman villa, the late villa’s predecessor, destroyed together with the 50-m long granary in an earthquake? In 2016 we hope to try and find out. We will also be exploring at least one of the kilns on the southern edge of the site. The discovery in 2015 of a tile waster with the name of Philippianus, almost certainly the owner of the late Roman villa, could indicate that one of the kilns was producing his stamped tiles, of which ten dies were recovered in our excavations in 2013, and an eleventh in 2015. That roof-tiles were indeed produced on site is clear from fig. 8. 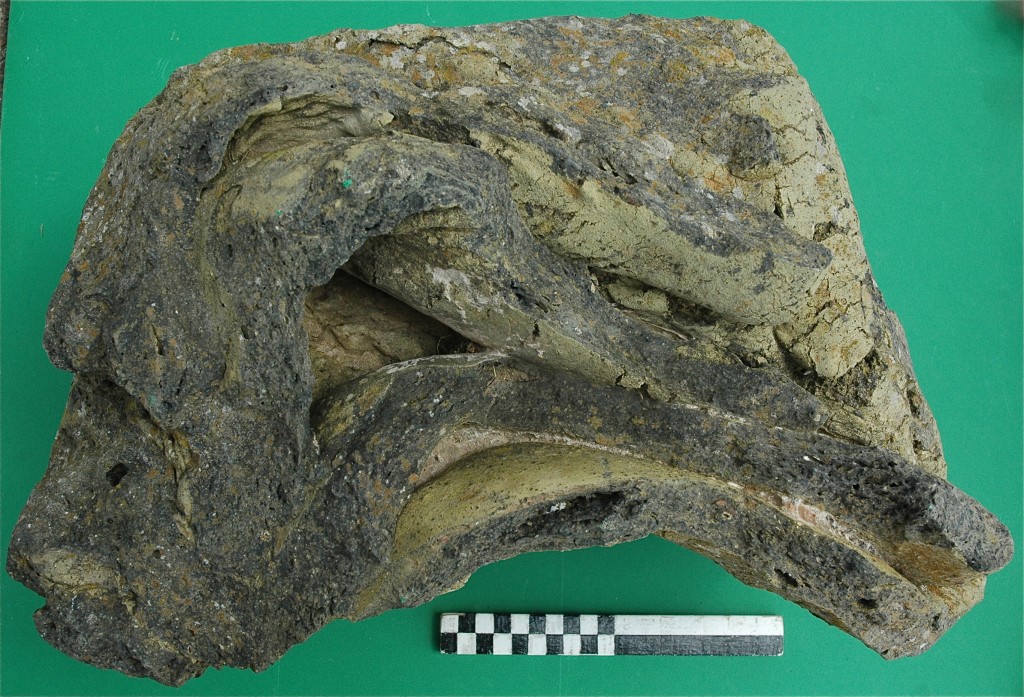 The excavation would not have taken place without the generous award of an Insight Grant by the Social Studies and Humanities Research Council of Canada. Antonella Fontanazza Coppola, landowner of Gerace, graciously gave us permission to dig on her land, and a permesso di scavo was obtained from the Regione Sicilia through the Soprintendenza dei Beni Culturali e Ambientali of Enna, where a huge debt of gratitude is due, for support and encouragement, to Arch. Salvatore Gueli and Dr Pina Marchese. Dr Enza Cilia, first excavator at Gerace in 1994, was as ever an unfailing tower of support. Paolo Guarino and Antonietta Lerz were our brilliant supervisors, who apart from extracting maximum information from the site with supreme skill were also enthusiastic teachers of our students; Sally Cann drew the finds with unfailing good cheer; Geoff Hedges separated seeds with professionalism and passion; Patricia Taylor, assisted by Courtney Innes, supervised the pot-shed with great efficiency; and Charlotte Westbrook Wilson, mater castrorum, provided exceptional logistical support throughout the season. Last but far from least, the UBC students who made up the rest of our fantastic team – Emma Betts, Michel Den Boer, Sam Dunner, James Ewasiuk, Mackenzie Doerksen, Siena Wood Hutton, Courtney Innes, Cate McCord, Alexis Watts and Finlay Wood, as well as Paige Petersen (UVic) and alumna Patricia Taylor, worked ceaselessly with great skill, total dedication and enormous good humour. Without the fantastic efforts of the entire team, Gerace would not have yielded up such a rich harvest of new information. I am grateful to them all.