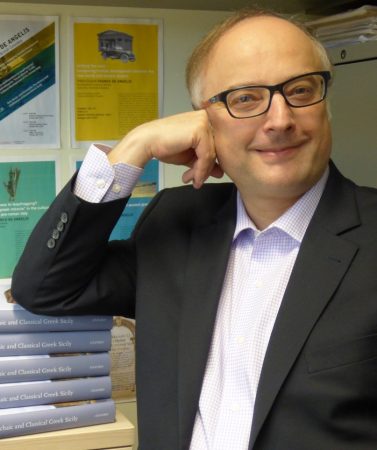 1) Book chapter: “Anthropology and the Creation of the Classical Other,” in E. Varto (ed.), The Classics and Early Anthropology: A Companion to Classical Reception (Leiden and Boston: Brill, date TBA), 5,000 words.

3) Book chapter: “Italian Scholarship and the Greeks outside their Homelands,” in F. De Angelis (ed.), A Companion to Greeks Across the Ancient World (=Blackwell Companions to the Ancient World series; Malden, MA and Oxford: Wiley-Blackwell Publishers), 7,000 words.

7) Sole-authored book proposal on the uses and abuses of Classical Antiquity by modern New World settler colonies for the new monograph series “The New Antiquity” published by Palgrave Macmillan and edited by Matthew Santirocco (NYU).

For much of the nineteenth and twentieth centuries, the history of the ancient Greek world was widely studied on the basis of a few favoured questions and states (most notably Athens and Sparta).   Since I was a graduate student in the 1990s, my research has sought to broaden the study of Greek history by grappling with a greater variety of questions and states beyond the traditional canon. What factors created the canon and how did change come about? What was life like in Greek states other than Athens and Sparta, especially in regions outside Greece, where environmental and ethnic conditions were usually quite different? How, in other words, did Greek migrations and diasporas contribute to the development of the ancient Greek world as a whole?  And, by extension, how culturally diverse was the ancient Greek world? What social and economic factors underpinned the traditional political and military narratives commonly encountered in standard narratives of ancient Greek history? When and under what circumstances did state formation arrive in Greece, the context within which civilization developed in the Greek world? These questions have formed the basis of my research activities.  Answering them requires a broad interdisciplinary approach, in the tradition first developed in Oxford in the 1930s by the Greek historian, Alan Blakeway. It is one which moves freely and fluidly between the disciplines of philology, history, and archaeology in order to combine texts and material culture in an equal and complementary manner in the full realization that no one form of evidence can on its own tell us everything we need to know about the ancient world. To quote the late David Ridgway: “Blakeway’s starting point was new, as was his method: that of the historian who was willing to learn not only the vocabulary of archaeology but the grammar and syntax as well” (in J.-P. Descoeudres [ed.], Greek Colonists and Native Populations [Oxford 1990], p. 61).  My overall aim is to write a new, more comprehensive Greek history, using the just described interdisciplinary approach.  My research has taken four interrelated directions.

The first direction has involved re-evaluating the history of Greek Sicily.  Sicily is attractive for this purpose because of its size (a quasi-continent) and location at the very crossroads of the Mediterranean.  The island also had an impressive mix of cultures (native, Greek, and Phoenician in particular) and geographical features that made it stand out compared to the Greek homeland.  Taken together Sicily can provide a unique chapter in the history of ancient Greece.  I first tackled Sicilian history in an Oxford University doctoral thesis on the Archaic Megarian city-states in the island, Megara Hyblaia and Selinous, chosen for their divergent evolution. The differences are strikingly obvious from even the most cursory of visits to the sites today: Selinous has left posterity some of the most impressive temples ever, whereas Megara Hyblaia’s monuments are trifling by comparison. What lay behind Selinous’ success? The differences were essentially due to varying environmental, economic, and political circumstances: Selinous had a territory four times the size of Megara Hyblaia’s from which to generate agricultural surpluses, and a more lucrative economic outlet (namely the Phoenicians) on which to convert them into wealth; moreover, Selinous was ruled for two generations by tyrants, who left their lasting mark through extensive building programs. My work has shown that even within the island of Sicily–a relatively small area in comparison with the ancient Greek world as a whole–states could develop in different ways, that there was regionalism within regionalism. This thesis has been revised and was released in 2003 in the monograph series of the Oxford University School of Archaeology as Megara Hyblaia and Selinous: The Development of Two Greek City-States in Archaic Sicily.  More recent research on Greek Sicily consists of another book, supported via the generosity of a Social Sciences and Humanities Research Council of Canada (SSHRC) standard research grant, which extends, both in terms of chronological periods and geographical coverage, the narrower subject-matter of the thesis-book to writing the first ever full-scale social and economic history of Greek Sicily in the Archaic and Classical periods. This book, entitled Archaic and Classical Greek Sicily: A Social and Economic History, has been published in early 2016 in the "Greeks Overseas" series via the New York office of Oxford University Press.

The second direction has involved pursuing cross-cultural and comparative perspectives to the study of Greek antiquity. The underlying premise here is that one cannot re-evaluate a particular region of the ancient world without re-evaluating the larger whole to which this part of the “puzzle” belongs.  To this end, two projects have recently engaged my energies.  One concerns an international conference that I organized called “Regionalism and Globalism in Antiquity” held in Vancouver in March 2007.  Professor Lord Colin Renfrew of Cambridge University delivered the keynote lecture, and fifty-six speakers from all over the world were chosen on a blind peer-review system.  I have edited and contributed an introductory essay to the volume of 14 peer-reviewed essays recently published with Peeters Publishers in Leuven entitled Regionalism and Globalism in Antiquity: Exploring their Limits.  The other project is another book tentatively entitled A Companion to Greeks Across the Ancient World that I am editing and contributing to for the series Blackwell Companions to the Ancient World published by Wiley-Blackwell in Malden, MA.  This book is already under contract and will consist of twenty-five chapters that will take stock of the unprecedented growth and development of knowledge and approaches over the past two or so decades.  This field is in dire need of an up-to-date account of the ancient Greeks outside their homelands from the Early Iron Age to the Hellenistic world forged out of Alexander the Great’s conquests.  Overall the aim is to write long-duration cultural histories that bring out the regional profiles of these numerous ancient Greeks and that seek to change our narratives of the ancient Greeks, whose traditional focus has largely been on “Greece” itself.

The third direction in my research is now attempting to bring together the latter two directions into a single whole.  The basic premise here is to re-evaluate the conjunction of regional trajectories, especially those of the Eastern and Western Mediterranean from the Early Iron Age to the development of Roman control over the entire Mediterranean basin.  One question in particular is guiding this research: Who were the main shakers and movers in the cultural development of pre-Roman Italy?  For over a century modern scholars have envisaged one answer. Immigrants from the East, especially Greeks, and to a lesser degree Phoenicians, were the dominant drivers in this development, bringing cities, metal-working technology, and in general higher culture to passive and inferior native Italian populations in the eighth century BC. But since the 1990s this picture has been dramatically challenged, particularly through the growth and interpretation of prehistoric archaeological data in Etruria and Sardinia. This evidence demonstrates that these two regions were already highly developed as prehistoric powerhouses, not dependent on immigrant stimuli for their initial rise to power. They acted, therefore, as magnets that attracted Greeks and Phoenicians to their regions.  The aim of this project is to produce a book which will rethink the part played by the “Greek Miracle” in the cultural development of pre-Roman Italy and to suggest some new solutions to this old problem.  The working title of this project is “Hellenizing Pre-Roman Italy: Facts and Fictions” for which a book contract is in preparation.

The fourth and most recent direction builds on my work on ancient Greek Sicily and on ancient Greek migrations and diasporas.  New World settler colonialism has often evoked comparisons with Greek, Roman, and Old World antiquity in general.  This new research seeks to move beyond the piecemeal discussion of Old World antiquity in the New World of North America, which is usually restricted to place-names (such as Syracuse, New York), neo-classical aesthetics and architecture, and literature.  Instead, I seek to establish a more comprehensive and systematic intellectual framework which connects Old World Antiquity with Europe’s exploration and settlement of (to them) the New World in the 16th to 20th centuries of our era.  As is well known, this exploration and settlement resulted in a significant expansion of human experiences with which Europeans could understand their past and imagine their futures.  Ancient Greece and Rome served as a major source of inspiration in these respects because of their importance to European education and identity.  Thus a two-way dialogue emerged, one in which Europeans regularly made parallels between their exploration and settlement of the New World with understanding ancient Greek and Roman history and, vice versa, the role ancient Greece and Rome played in providing parallels with imagining how life in the New World might one day become.  This research investigates both these kinds of parallels and the motivations for them, especially those derived from ancient Greece, as well as assessing the distortions and possibilities raised by such parallels.  The working title of this project is "Classicizing the Continent" for which another book contract is in preparation.

As part of my research, I have always travelled extensively to visit ancient sites and museums and have also taken part in excavations and field surveys in Greece, Italy, and Britain.  The underlying philosophy is that to be a good historian one must get out of one’s arm-chair and obtain as much hands-on experience as possible to write about the past.  Most recently, my students and I worked alongside Stanford University on the acropolis of Monte Polizzo (2001, 2002, and 2004) in Western Sicily.

The Archaeological Reports review scholarly developments in the archaeology and history of the ancient Greeks and are published by The Society for the Promotion of Hellenic Studies and The British School at Athens.

I am interested in supervising motivated and well-trained students doing research in my areas of specialization. Over the years, I have supervised and co-supervised both undergraduates and graduate students in writing their B.A. honours theses, M.A. theses and graduating papers, and Ph.D. theses. The topics have included Greek banqueting practices in their Mediterranean context, Archaic and Classical Greek altars, early Greek kinship, the cults of Greek founders, emporia as places of economic and religious interaction, Greek water cults and divinities, Diodorus Siculus, the gerousia at Ephesus, and Etruscan state formation. My students, if wanting to pursue their education, have earned spots in prominent graduate programs (such as those at the University of Michigan, Yale University, Stanford University, the University of Texas at Austin, Oxford University, Cambridge University, and the University of Chicago) and have garnered top awards and prizes from university and external sources during and after their studies (such as the Social Sciences and Humanities Research Council of Canada, the German Academic Exchange Service [DAAD], the Trudeau Foundation, and the Etruscan Foundation, as well as being shortlisted for Rhodes Scholarships). On completion, these students have succeeded in finding jobs, such as in the Department of Humanities at Grant MacEwan University and the Department of Classics at Dalhousie University. I always look forward to hearing from potential students.

Classical and Hellenistic Greek, Part I.